The Clearblue Digital Pregnancy Test with Conception Indicator is the first and only test that is as accurate as an ultrasound scan at dating pregnancy**. Its Smart Dual Sensor ™ not only tells you in words if you're 'Pregnant' or 'Not Pregnant', also tells you how far along you are.

So Accurate... Tells you How Many Weeks

It's like 2 tests in 1 - it first detects if the pregnancy hormone is present with over 99% accuracy from the day your period is due, and if you are pregnant, it ALSO indicates how many weeks since conception occurred 1-2, 2-3 or more than 3 weeks (3+). The Conception Indicator is 92% accurate in detecting when you conceived.

Test up to 4 Days Early

So sensitive you can test up to 4 days before your period is due*.

Within 3 minutes your 'Pregnant' or 'Not Pregnant' result in words will appear on the screen. If the result is 'Pregnant' the test will also indicate time since conception occurred ( 1-2, 2-3 or 3+ weeks).

* Clearblue recommends that you test from the day your period is due. However, the pregnancy hormone increases rapidly in early pregnancy and Clearblue can be used to test up to 4 days before your period is due. In clinical testing with early pregnancy samples Clearblue gave the following results: 55% of women received a 'Pregnant' result 4 days early, 86% of women 3 days early, 97% of women 2 days early,98% of women 1 day early. If you test early and get a 'Not Pregnant' result it is possible that the level of pregnancy hormone may not yet be high enough to be detected. You should test again when your period is due
** 'Weeks' result 97% in agreement with later ultrasound dating scan. Based on studies of 187 women comparing results (1-2, 2-3, 3+ weeks since conception) to ultrasound dating +/- 5 days. 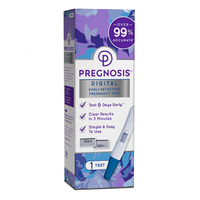